Back in the 80s there was a song by country/pop singer Mac Davis titled “It’s Hard to be Humble.” The lyrics perfectly reflect the obnoxiously arrogant attitude I sometimes have.

It IS hard to be humble! It’s a fundamental flaw of the human condition. Eve and Adam sought to be equal with God and look at how that turned out. Napoleon invented the Napoleon complex. Mohammed Ali claimed, “I am the greatest of all time,” yet he lost five times. If ego was muscle, Donald Trump could bench press the White House. Humility is clearly a problem for many people.

God-followers are certainly not immune to hubris. David’s pride led to egregious sin. Some pompous televangelists have fallen victim to their own egos and became national laughingstocks. Lucifer himself was an arrogant devil. Everyone is afflicted.

The phrase “pride goes before a fall” is not in the Bible, but in Proverbs we read, “pride goes before destruction.” That’s seems much worse! Proverbs also informs us, “There are six things that the Lord hates….” The first thing on His list: a proud look (KJV).

If the Lord God hates something, it is best to avoid it. 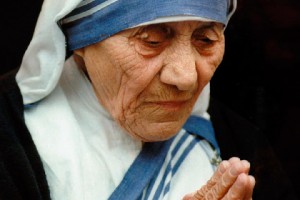 one will come along who understands the concept of genuine humility. Mother Teresa, the Roman Catholic nun who became world famous by serving the poor in India, described herself as “…a little pencil in the hand of a writing God, who is sending a love letter to the world.” Truth is, we Christians are all little pencils, though some seem to think they are Mont Blanc pens.

Humility is not listed among the “seven cardinal virtues,” but it should be. Few human characteristics are more valued by God. In Luke 14 we read, “…he who humbles himself will be exalted.” Mother Teresa was exalted for her love and humility – she won a Nobel Prize – but she always gave the glory to Jesus Christ.

Philippians 2:3 states, “in humility value others above yourselves.” That is a righteous goal, but my ego, pride and selfishness get in the way. I value my own comfort. I seek recognition. I often judge people. Those are not the attributes of a selfless, humble servant of God

One cannot be prideful and obedient to Jesus at the same time. Jesus was the ultimate example of someone who humbled Himself in service to God. We are to be imitators of Christ, but when it comes to real humility, I’m probably closer to Mack Davis – I’m doing the best that I can.