A priest, a rabbi and an Imam walk into a bar.  The bartender says, “What is this, a joke?”

Some say “all paths lead to God.”  That’s a wonderfully inclusive thought and the open-minded people all nod in agreement.  No one has a monopoly on the truth!  It’s an enlightened attitude until we actually explore the concept of “truth.”

Not to get all metaphysical, but the law of non-contradiction states that contradict 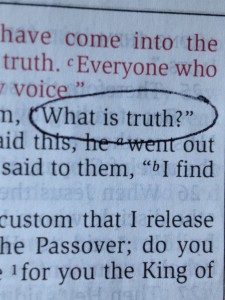 ory statements cannot both be true in the same sense at the same time.  So, if one religion claims so-and-so is the last and greatest prophet and he speaks for God, then it is either true or untrue.  If it is not true, then followers of that prophet had better brace themselves for an unpleasant judgement.

Christians believe that Jesus is the embodiment of God.  Jesus is the god we can see and touch, and He reveals all truth about our Heavenly Father and life itself.  That is either a true statement or it is false.  I have staked my own eternity on the answer.

“Again the high priest asked him, “Are you the Christ, the Son of the Blessed?”  And Jesus said, “I am, and you will see the Son of Man seated at the right hand of Power, and coming with the clouds of heaven.” – Mark 14:61-62

The writer C.S. Lewis once famously addressed the issue of people who say that Jesus was merely a great teacher, in the category of Plato and Gandhi.  Lewis wrote, “a man who was merely a man and said the sort of things Jesus said would not be a great moral teacher. He would either be a lunatic — on the level with the man who says he is a poached egg — or else he would be the Devil of Hell. You must make your choice. Either this man was, and is, the Son of God, or else a madman or something worse.”

When it comes to truth about God, we all must make a choice.  If Jesus was not God then I’ve wasted a lot of money on Christmas gifts.  If you believe that He (note the upper case “H”) was God incarnate, you have reached a profound conclusion, but you also have raised some other very important questions:  Is the Bible true and infallible?  By what means are we reconciled with God; grace or works, or some combination?  Are heaven and hell real?  A good many church denominations were created based on answers to these questions.

But the first question, the most important question, is this: what is the truth about Jesus… or Muhammad or Buddha or L. Ron Hubbard?  Were all of them phonies?  Were they all inspired by some higher power?  What is the truth?

Among the founders of the great religions, only Jesus claimed to be divine.  His followers of that day were completely convinced, so convinced that most died as martyrs.  His teachings are transcendent: love your neighbor as yourself, return good for evil, forgive everyone, help those in need, etc.  They present a blueprint for a peaceful, joyful world.  Compare that philosophy with the Muslims, who are instructed to kill infidels, and they will issue a fatwah if you so much as use a Koran for a coaster.  How about Hindus and Buddhists, whose belief in karma is such that they are reluctant to help beggars, orphans and widows who (they believe) are suffering for misdeeds in a past life.

At his trial, Jesus explained to the Roman Governor Pilate, “I was born and came into the world to testify to the truth.  All who love the truth recognize that what I say is true.”

Pilate replied, “What is truth?”

Indeed, that is a great question.  Religious scholars have sought the answer for centuries.  The truth is surprisingly easy to find, hidden before us in plain sight.  Study the Gospels yourself and come to your own conclusion.  The truth is in there… no joke.

“Blessed are the merciful, for they shall receive mercy.”

I was not a rebellious youth, I was a hypocritical, two-faced phony.  A Christian goody goody by day, hell-raiser at night.  My dad was not fooled; I was the youngest of six children.  One morning I was late for work due to hungoveritis.  This was a prickly problem because I worked for my father, a teetotaler.  He met me as I arrived at work, bleary eyed and disheveled.  I expected hell fire.  His wry, nonsensical comment was, “you must have had something that didn’t concern you last night.”  He passed me by and nothing else was said.  It was a lesson in mercy, the type of mercy I have sometimes shown to my kids.  Our Heavenly Father demonstrates mercy to us all the time, an example of how we should treat others.

“Blessed are the pure in heart, for they shall see God.”

as freedom from contamination.  A believer’s heart is like gold, and it is very valuable to God.  But like gold it can be contaminated by impurities.  Fortunately, God is a refiner of hearts.  He is constantly working to purify my heart and mind.  He wants me to act in a Mark 12 way, “…love the Lord your God with all your heart and with all your soul and with all your mind and with all your strength, and love your neighbor as yourself.”  If you examine my heart closely you will see it is contaminated by particles of pride, anger, selfishness, lust, greed and a bunch of other ugly attitudes.  Ultimately my heart will be completely purified in heaven.  Until then, God will continue His refining work in me.

“Blessed are the peacemakers, for they shall be called sons of God.”

The world is a violent place.  In my city, people are shot almost every night.  Shooting and murder are only the most egregious expressions of anger.  People fight, shout, cry, run away and argue all the time.  It even happens in churches.  I have witnessed numerous ugly arguments, shouting and name-calling… and that was in church leadership meetings!  How can this be when we worship a God of peace? (2 Cor. 13:11 and elsewhere.)  Peacemakers are humble servants of Jesus Christ.  Philippians 2:3, “Do nothing from selfish ambition or conceit, but in humility count others more significant than yourselves.”  Real peacemakers are servants.

“Blessed are those who are persecuted for righteousness sake, for theirs is the kingdom of heaven.  Blessed are you when others revile you and persecute you and utter all kinds of evil against you falsely on my account. Rejoice and be glad, for your reward is great in heaven, for so they persecuted the prophets who were before you.”

Years ago I met a man in an Asian country who shared his life story with me.  He had been jailed and tortured numerous times because he was a Christ-follower who was not afraid to tell others about Jesus.  He told about how the guards would cut his arms and rub salt and hot spices into the wounds to inflict pain.  As an American I have only experienced mild ridicule for my religious beliefs.  Somewhat skeptical, I asked to see evidence.  He turned his wrists upward for me to examine.  I almost wept.  His commitment to Jesus was evident in his scars.  He is still preaching in his country, telling others about a God who loved us so much He sacrificed His son for our sins.  He also is still living under persecution.  This man’s faith is real and his reward in heaven will be great.  As for now, he is genuinely blessed… his heart and mind are correctly aligned with God and he is in a good state of being.

May we all be so blessed.