As a boy I had a friend named Joe.  I think about him a lot.

I met Joe when I was about 10 but didn’t get to know him well until we were in high school.  He was probably the most popular guy in our school.  Not because he was rich, handsome or a great athlete; it was because he was crazy.

Many of my coming-of-age moments 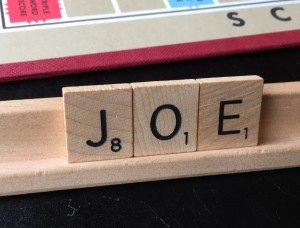 involved Joe.  Fun surrounded him like the dust cloud around Pig-Pen.  Wherever he was, something interesting was bound to happen.

The biology teacher stepped out of the classroom for five minutes.  Joe found a small bottle of highly concentrated blue dye in the cabinet and quickly convinced a couple of his buddies to bet him to take a sip (I may or may not have been involved).  He put his tongue on the open bottle and allowed a couple of drops into his mouth.  When the teacher returned, the students were snickering and Joe had his head down on his desk.  The teacher demanded to see Joe’s face.  When Joe raised his head, royal blue saliva was oozing from the corners of his mouth.  As punishment, Joe, his teeth bright blue, was made to sit in the hallway and smile at all who passed by.

As a kid Joe befriended an older boy with severe learning disabilities.  The older boy was harmless but a bit frightening to younger kids and their parents because he was very large and strong and loved to rough house.  He would have been shunned by everyone were it not for Joe, who always knew how to include him and control his rowdy behavior.

Streaking – running naked through a public place – was a big fad for a time the 70s.  Everyone in my school talked about it, but no one had the guts to do it… except Joe.  An indelible memory of my teenage years was seeing Joe’s white butt growing smaller in the distance as he ran down the main street of our town.  I think he earned a hundred bucks for that stunt (I may or may not have been involved).

Joe got married soon after high school and had a couple of kids.  I moved away but we remained in touch.  I saw him infrequently, but when I returned to my hometown we would sometimes get together.  We would reminisce and laugh out loud at the memories we shared.  Joe was the very definition of a good dude.

When he was about 30, Joe took a job with a fuel company.  One day there was an explosion caused by a leaky gas truck and he was severely burned.  Joe lingered several days in the ICU.  The hospital reported that the number of people from our hometown who donated blood on his behalf set some sort of record.  The largest church in town could not hold the number of mourners for his funeral.

I smile whenever I think of Joe and I look forward to seeing him in heaven (he was a Jesus follower). My oldest friends and I still talk about him when we get together.  There are very few people you meet in life who are truly unforgettable.  That was Joe.