What does it feel like to walk on water? Do the bottoms of your feet get wet? Does it feel squishy and soft, like a Dr. Scholl’s Massaging Gel Insert, or like hard, cool linoleum? If you just stood there, would you bob up and down like a cork?

Why is this information not in the Bible?

These are questions I’d like to ask Peter when I get to heaven. The sensation he felt when he stepped out of the boat in Matthew chapter 14 must have been really weird. Ot 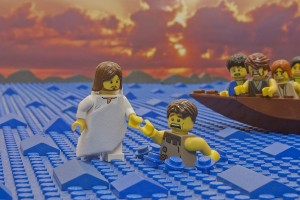 her than Jesus, no one had ever walked on water before. You’d have to think it felt cool to his feet, but maybe he didn’t even notice because he was so freaked out that he was actually WALKING ON WATER! If you’ve read the story you know that he panicked, started to sink and had to be rescued by Jesus (haven’t we all?).

This story has great meaning to me because God used it to change the course of my life. In 1993 I was a mid-level executive at successful advertising firm. My company had recently merged with another agency to form a bigger agency. Within weeks of the merger I began to sense that I was gradually being squeezed out. I don’t think I fit their corporate culture and the new big boss didn’t see much value in me. My projects were floundering and I was under pressure to produce… but I was failing. Every day I prayed for God to help me do better, but I continued to sink.

One morning was especially bad. I had problems with multiple projects and some of my clients were grumbling. For days I had been wondering what God was trying to teach me. Was He putting roadblocks in my path to lead me in a new direction? Did He want me to quit my job? Or maybe Satan was creating havoc with my work to get me to quit or be fired. If I quit for the wrong reason, it might ruin my career!

When lunchtime rolled around I decided to stay at my desk and pray for guidance. I told my Father, “Lord, what do You want me to do, quit my job? Is this You, trying to lead me in a new direction, or it is the devil trying to deceive me? I want to be obedient, but I don’t know if it’s Your voice I’m hearing. Please tell me if it’s you, Lord!”

I kept a gigantic five-pound Bible on my bookshelf. I flopped it on my desk and randomly flipped it open. I wasn’t expecting an answer, just some comforting verses to calm my frayed nerves. I looked down and my eyes landed on these words:

“But immediately Jesus spoke to them, saying, “Take heart; it is I. Do not be afraid.”

I blinked. Then I read the verse again. I became acutely aware of how quiet my office was. Did God just speak to me through Scripture? I had asked the Lord a direct question, “is it You, God?” I didn’t expect to see His answer in black and white, but there it was. I continued reading.

So, Jesus tells Peter, “get out of the boat.” Defying physics, Peter steps out and, at least for a few moments, walks on water. He didn’t think about what he was doing, he just obeyed.

I sat there for the remainder of my lunch break pondering what this meant. That afternoon I walked into my boss’s office and gave him my two-weeks notice. He asked, “are you sure?” I explained that I really believed God was leading me in a new career direction. He probably thought I was crazy. I had no new job lined up and no prospects for work, but I was going to step out in faith.

A few weeks later as I sat at my desk at home, the phone rang. It was a former client who had called the agency looking for me. They gave him my home phone number. He had a project that he needed help with and asked if I was available. Yep, I was definitely available. Over the next several months more former clients called, and some then new clients called. Bottom line, God gave me a new business that sustained me for the next 20 years. I actually made more money than before and as a bonus, God gave me enough free time to devote to new interests, such as volunteering with a mission organization that plants churches in Third World countries. I’m now on their board of directors.

God doesn’t always answer you in an audible voice or with a verse of Scripture, but sometimes He does. When you finally step out of the boat and onto the water, it feels really cool.

News of the recent earthquake in Nepal brought back some poignant memories for me. In 1998 I visited Nepal on a short-term missions project. We were there to help teach church leaders from remote villages the deeper truths about God.

How arrogant I was to think I could teach these saints anything. After hearing their stories of faith, I realized just how little I appreciate the incredible gift of salvation through Jesus Christ.

Nepal, the home of Mount Everest and eight of the world’s ten highest peaks, was at 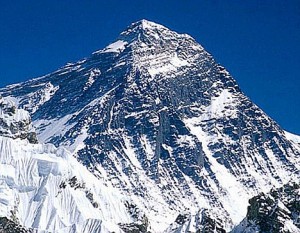 that time a Hindu monarchy. Its king and most government officials were Hindus and Hinduism dominated the culture (still does). Christians were a tiny fraction of the population, behind Muslims and Buddhists. As a minority, Christians were actively persecuted and some had given their lives for the sake of Christ.

There were, however, pockets of believers in various places across Nepal. One such area was in the south-central region. This very rural, remote location was selected as a relatively safe place for church leaders to gather for a leadership conference. On the day we arrived – following a harrowing two-day journey – the conference leaders were finishing a make-shift tabernacle on a hilltop in the jungle. It was made of wooden poles with palm leaves for a roof. A small generator and sound system had been carried in on the backs of the believers.

Nearly 300 pastors and lay-leaders had come from all over that region of Nepal to participate in the conference, which was being led by my friend, a Nepali who had suffered much for the faith. A mutual American buddy called him “the Billy Graham of Nepal.” Two preachers from the U.S., and a worship leader from Hong Kong were the featured speakers.

On the second day of the conference the Nepalese Billy Graham introduced me to a man I will never forget. His name was Vabikan. He was in his 40s but his weathered face looked more like 60. He was tiny, maybe 110 pounds, and somewhat somber. When I heard his story I understood why his countenance was low.

Vabikan had once been a tribal witch doctor, a religious man who worshipped non-existent gods. Many years earlier his daughter became very ill, but despite his best efforts, he could not heal her. A friend suggested he take his girl to a nearby village where there lived an Australian missionary. Perhaps he had the right medicine to cure her disease.

The missionary was sympathetic, but admitted he had nothing to offer the daughter except prayer to the one true God. So he prayed. Vabikan and his daughter went home disappointed and a little confused.

God, however, had a plan. Soon the girl’s condition began to improve. This delighted Vabikan, who wanted to know more about the missionary’s religion. Under the tutelage of the missionary, Vabikan came to faith in Jesus. His excitement was such that he went home and began to tell others about Christ and soon they had a small church going in his village. From there, they started taking the Gospel to other villages and more people became believers.

The regional police eventually got wind of Vabikan’s activities and paid him a visit. He was beaten and told to renounce this new religion. Undeterred, Vabkian kept preaching. The police came back and beat him again. This cycle went on for some time until one day the police hauled him into the jungle and gave him an ultimatum – either renounce Christ or they would hack him to pieces.

Vabikan the faithful replied, “If you kill me today, that’s good, because I will be with Jesus. If you don’t kill me, that’s good too because I can tell more people about Jesus. Either way, it is good.”

The police were flabbergasted by the response and decided to let him go. Must be crazy, they thought. Over the next few years Vabikan would lead hundreds of people from his tribe to salvation in Christ. He became such an important leader that he was elected to represent his tribe in the Napali congress.

The sad Vabikan that I met that day in 1998 had good reason to be despondent. Less than a month before I met him, his wife, son and two grandchildren had died from poisoned food. Some speculated that his enemies were involved, though there was no proof of a crime.

When I asked Vabikan how he could endure such a tragedy, he replied through an interpreter, “I wanted to die myself from the grief, but God came to me and told me that I cannot die yet because there are more people who need to know about Jesus. That is why I will continue to live.”

I pray for the believers in Nepal who are suffering because of the earthquake. Their faith is as big as the Himalayas.