Life in the Arkansas River delta is tough. My dad and my granddad were “buckshot farmers” in Arkansas. Buckshot is the term used to describe soils with a large proportion of clay particles. This type of soil is typically dark, dense and rich, perfect for rice and soybeans. It is sticky when wet and cracks open when dry. Tilling this type of soil takes strength, the strength of powerful machines and the strength of men who are willing to work very hard over a lifetime.

When viewed from ground level, the Arkansas delta is ugly and unforgiving. It is crisscrossed by stagnant swamps and ditches, cluttered by thorny underbrush, populated with a wide variety of snakes and varmints, and thick with mosquitoes and other biting and stinging insects. Few would choose to live there unless their livelihood depended on it.

I’ve traveled a great deal in my business career and have flown over the Arkansas River delta many times. It’s funny how different it looks from 20,000 feet. When you look down on those buckshot farms what you see are lush green fields, glimmering streams and ribbons of blacktop roads that evoke thoughts of peaceful bucolic country living. It is beautiful. The perspective is much different when you are in rubber hip boots, standing in the middle of a rice field in August with snakes and skeeters vying for your attention. It was that type of work that motivated me to go to college.

Perspective. Life on Earth is all we know and our view of heaven is sketchy, at best. We don’t see our lives from God’s perspective, we see it from the hot, sweaty, uncomfortable and sometimes dangerous ground-level view of life. 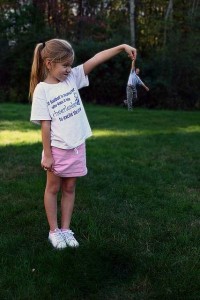 named Rainey Lipscomb had a wonderful perspective on life and death that she shared in a classroom essay some years ago. In response to the question, “Why do people have to die?” she wrote, “Some people take dying too seriously. It’s not that sad really, if you know they have given their life to Jesus. You know that you will see them again in heaven.” Wow, what profound faith from a kid! Clearly, she had a heavenly perspective.

Rainey learned much of her spiritual maturity from her parents, Cindy and Mat Lipscomb. Cindy and Mat had an unwelcome “15 minutes of fame” in 1999 when their two oldest daughters, Rainey and Lacey, were killed in an Amtrak accident in Bourbonnais, Illinois. Cindy, their three young daughters and some family friends were returning to Memphis via passenger train from Chicago after a short vacation. About 9:30 that evening, a semi tractor-trailer rig hauling steel tried to make a late crossing in front of the train. The driver of the tractor-trailer misjudged the speed of the train and a collision ensued. The two oldest Lipscomb girls and nine others died in the crash.

The girls’ father, Mat Lipscomb, is a successful businessman in Memphis. He was reunited with Cindy and their youngest child in Chicago as the facts surrounding the accident were revealed. Most of the blame was focused on the truck driver. Reporters covering the catastrophe were eager to get a reaction from the victims, and within hours began to approach Mat and Cindy for their response. The Lipscombs, overwhelmed with grief, were reluctant to comment, but a pastor friend, who knew well the depth of their faith, spoke to them about their responsibilities as followers of Jesus. “Tomorrow morning’s newspaper may be the only Bible some people will ever read,” said the pastor. “I think you ought to do the interview.” Mat and Cindy prayed, then relented to speak with a reporter.

They told a story of forgiveness. They admitted their heartbreak and pain to the reporter, but refused to blame the truck driver. Instead, they focused on forgiveness – the forgiveness we have through Jesus Christ. They repeated this theme in all the interviews they gave in the weeks that followed.

According to news monitoring services, the Lipscombs were able to share their message of forgiveness with 28 million people through various interviews. What was the impact? Mat related this report: “Many weeks after the accident, Robert Hooker, a Baptist preacher and friend of ours in Chicago, wrote me to say that he had just baptized the 37th person who had been saved, in part, because of our story and how it had affected their faith in Jesus. We’ve heard similar stories from other ministers.”

The Lipscombs chose to take God’s perspective; their girls had simply gone ahead to their permanent home and were now awaiting the arrival of their parents and baby sister. In August, 2012, there was a reunion in heaven as Rainey and Lacey welcomed their mom with kisses, hugs and laughter; Cindy Lipscomb died of a brain tumor at age 58.

“People have asked if following Christ is worth all of this, the loss of my girls and my wife,” said Mat.  “The short answer is, yes, it is absolutely worth it, but some explanation is necessary. I know the meaning of life; we are on this planet to learn to love God and to serve Him and accept His son Jesus as lord and savior, and to encourage others to do the same. Therefore, I am honored that God chose us to have this testimony. I can’t change what happened, but I can choose how I respond to it. I want to be a witness to the love and mercy of Jesus Christ.”

Having the proper perspective does not mean there will be no pain.  That’s when we must remember the words of Jesus, “I have told you these things, so that in me you may have peace. In this world you will have trouble. But take heart! I have overcome the world.”  (John 16:33 NIV)