Behold the salt on your dinner table. It is the stuff of life and legend. 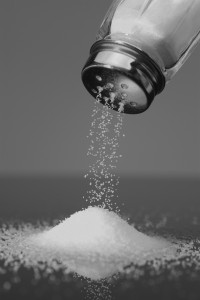 er has the power to make you sneeze, but salt is mentioned approximately 40 times in the Bible! Pepper? Not once.

Perhaps the most famous reference to salt is in Matthew 5:13. In the Sermon on the Mount, Jesus tells His followers, “You are the salt of the earth.” This seems a curious statement until you know the value and utility of this savory chemical compound. From ancient times salt has been an important, even necessary part of everyday life. In fact, without salt, people would perish.

Humans contain almost a pound of salt and each day we need to replenish the salt used by our bodies to maintain our health. If you don’t get enough salt, you may experience muscle cramps, nausea and dizziness. So, was Jesus saying that without us Christians, the world would get dizzy and vomit? Not exactly.

In addition to medicinal benefits, salt also purifies and preserves. As a kid I discovered you could pour salt into a puddle of muddy water and it would become clear. Today, saltwater swimming pools are very popular, no doubt because the water is so clean. Salt also preserves. In the old days before modern refrigeration, pork was packed in salt to preserve it for long periods. For centuries humans have known the value of salt. Roman soldiers used to receive some of their pay in the form of salt, their “salarium,” from which we get the word salary. This is why we still say someone is “worth their salt.”

What does all this have to do with being a Christian? Think about our world today. Is it polluted, both physically and morally? Do people need clarity in the form of truth? Is human culture decaying from sin and decadence? Christians behaving as salt would help lend moral clarity and we could help preserve what is good and right. This would, no doubt, be delicious to our Father in heaven.

The world needs salt, it always has. But being salt isn’t always easy. That’s why some believers don’t even try to be “salty,” preferring instead to bland and blend in with the world. Jesus said salt that loses it flavor is good for nothing expect to be thrown out and trampled under foot.

The next time you salt your potatoes, think about Jesus’s words. He has sprinkled us on the world for an important purpose. Stay salty, my friends.