Our featured word for today is “microaggression.” 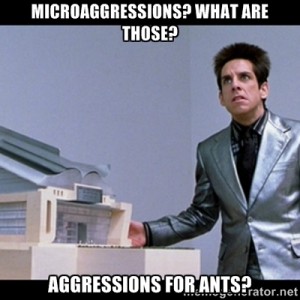 messages to certain individuals because of their group membership.” It’s not an outright put-down or insult, it is a comment or attitude that makes another person feel somehow inferior or uncomfortable.

Younger, healthier people often mock me for my expanding waistline and receding hairline. Is this a microaggression? As a middle-aged white guy, no one really cares if I am aggressed. I’m an easy target, the victim of doughboy discrimination.

Some examples of microaggressions cited in the news: Five American high school students were suspended on Cinco de Mayo for wearing shirts that display the American flag. Some city utility services are replacing the word “manhole” with “utility hole.” It may be considered insensitive to ask, “Where were you born?” A kid chews a Pop Tart to look like a gun and is expelled from school.

Pastry as a weapon!

Meanwhile, terrorists cut off the heads of Christians in the Middle East. Under what category do we classify that act?

Some may be surprised to know that the Bible addresses the subject of microaggression. Jesus followers are told to love others as we love ourselves. That’s actually great advice for everyone, no matter your faith or lack thereof. If we all adhered to the Golden Rule then the word microaggression would not exist, which would make this essay unnecessary.

When I tell people I was born in Arkansas, is this a microaggression against myself?

Other biblical passages on the concept of microaggression:

These verses directly contradict human nature and a modern culture that compels us to glorify ourselves. Marketing, movies and music proclaim, “You are god!” Your comfort, image and welfare come first. Ego becomes idol. Jesus teaches us otherwise.

Here’s a concept… If someone assaults you with a microaggression, whether intentional or unintentional, just forgive them. It’s hard to do unless Jesus is your role model.

Sin as a microaggression against God. It grieves Him when we are disobedient, just as it grieves a parent when their child disobeys. He wants us to love others even if they don’t love us. Macrolove in the face of microaggressions.

So, from now on I will chew my Pop Tart into the shape of a cross and bless people with it – which is likely a microaggression to non-Christians.

For those who were counting, I used the word “microaggression” 14 times!