Millions of Millennials suddenly and simultaneously realize that rap is not actually music but a form of rhythmic chanting that is neither entertaining nor inspirational.

Strip poker for politicians! Every time a presidential candidate lies, exaggerates or says something patently ridiculous they are forced to remove an article of clothing. Prediction: they’re all naked by March. 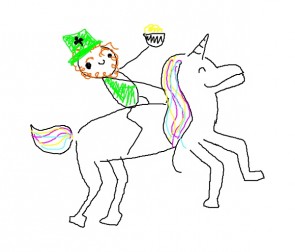 The Philadelphia 76ers beat the Golden State Warriors. It would be the basketball equivalent of seeing a leprechaun riding a unicorn.

Someone develops a new kind of milk chocolate that promotes lean muscle growth.

Kim Kardashian and Miley Cyrus keep their clothes on.

The producers of Star Wars: The Force Awakens decide to give all the movie’s proceeds to homeless shelters.

Every member of Isis develops gout and hemorrhoids. They are debilitated to the point of unconditional surrender. Christian missionaries then build hospitals to care for them.

My wife’s smile is trademarked and everyone who sees her has to pay a royalty.

My favorite football team goes undefeated, plays for the national championship and invites me to the coin flip at the big game.

In an act of great irony and heroism, cops rescue Quentin Tarantino from inner-city gang members who are angry that his new movie, The Hateful Eight, is so horrible that they want their money back.

A new dog food is developed that makes dog poop evaporate after 30 seconds.

Every Christian missionary working around the world has the prayer and financial support they need.

A New York advertising executive “discovers” my granddaughter, the future Miss Mississippi, and uses her in TV commercials. The commercials earn millions of dollars for everyone involved, including her grandfather who acts as her agent.

My son gets a knock on the head that changes his brain chemistry so that he enjoys picking up dirty laundry and washing dishes.

Caitlyn Jenner enters the 2016 Olympics in an effort to win the women’s heptathlon. She/he is denied permission to compete because she/he is genetically a man. She/he files a discrimination lawsuit against the Olympic Federation and wins. The Olympics as we know them are cancelled because the events are declared “sexist.” New Olympic Games are created where women and men compete against one another in trivia challenges and interpretive dancing. This creates a public outcry resulting in…

The National Mental Health Association determining that excessive political correctness is a mental disorder. The prescribed treatment is a two-week vacation to North Korea.