“Sorry for calling you a prostitute, Mary.”

A lot of people owe Mary Magdalene an apology.  Bible experts will tell you there is not a shred of evidence that Mary of Magdala was a whore.  Yet, because of some poor scholarship by Pope Gregory in the Sixth Century, her reputation was seriously slandered.  Today she is often portrayed as a shady lady in books and movies.  The Catholic Church admitted Gregory’s mistake 400 years later, but the rep stuck and she became the Belle Watley of the Gospels. 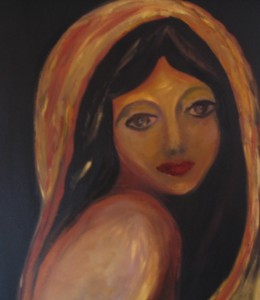 Mary also has often been inaccurately confused with the woman who washed Jesus feet with tears and dried them with her hair.  To further set the record straight, she was never romantically linked to Jesus nor did she become an apostle after the resurrection, as claimed by some Gnostic gospels and the novelist Dee Brown.

With the exception of Jesus’s mom, not a great deal is known about any of the Mary’s.  Mary Magdalene is mentioned 14 times in the Gospels, but with little in the way of backstory.  She was from the town of Magdala, on the seaside in Galilee.  Historians say it was a prosperous city with a wild reputation, which may have promulgated the idea of her promiscuity.  There is no mention of a husband.  In Mark 8 she is listed along with two prominent women who were said to provide financial support to Jesus and his disciples.  Perhaps she came from a wealthy family and thus could afford to travel about with the Lord and his followers.

One thing we know for certain is Mary was possessed by seven demons whom Jesus cast out (Mark 8).  The reference to demon possession may have indicated mental illness, epilepsy or simply evil satanic spirits.  In any event, Jesus healed her and she became a devoted follower, even to the point of witnessing the crucifixion.

Mary occupies a unique and special place in the story of the Messiah.  All four gospels mention that she was among the first, if not the VERY first person to encounter the risen Jesus, who instructed her to tell the others He was alive.  That fact alone was a significant acknowledgement of her importance; women at that time were not considered credible witnesses.  Jesus thought otherwise.  Mary’s word mattered.

To summarize, Mary was no floozy.  She was a faithful follower of Jesus who stayed with Him to the triumphant end.  She should be remembered for absolute devotion and love, not lust.

She was Mary… Extraordinary!