Like the frog in the frying pan, lots of people are unaware they need saving.

Christians sometimes ask the question, “are you saved?”  The respondent, who is likely not a church attender, may be confused. Their honest response might be, “saved from what?” 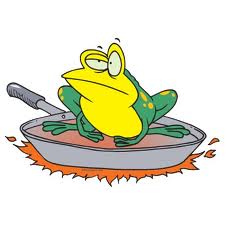 Explaining salvation to a person raised in a post-modern, post-religious culture is a little like explaining pizza to a tribal herdsman in the African Sahara.  “Well, you start with dough, then add tomato sauce and lots of cheese, then some little slices of meat called pepperoni…”

Some “lost people” may have enough religious awareness to understand you are talking about hell.  Hell, according to popular culture, is the fictional place where bad people go when they die.  Other folks may think you mean saved from the devil, who is thought to have horns, a pitch fork and a goatee.  Why a goatee?  Because goatees are evil!  Some might mention sin, which non-Christians define as any activity that is fun.

So, in summary, to be “saved” means avoiding a make-believe place in the afterlife ruled by a cartoon character.  In the meantime, quit having any fun and follow Tim Tebow on Twitter.

Clearly there is an information gap.

Rather than jump directly to the salvation question, perhaps it is better to get some basic information first.  Do you believe there is a god?  If so, what is the truth about him?  This will inevitably lead to a discussion of Jesus, and that’s good because there is a lot to like about Jesus.  Getting someone to accept the premise that Jesus is the personification of the real God is essential to understanding the whole salvation thing.

But again, the question is, saved from what?  Matthew 1:21 states that Jesus “will save His people from their sins.”  More specifically, the consequences of their sins.

Ah, that’s the hard truth that atheists, agnostics, teenagers and even some Christians don’t want to admit – actions have consequences.  From God’s eternal, spiritual perspective, the consequence of sin is death, and not just physical death but “eternal death;” that is, eternal separation from God.

“For the wages of sin is death, but the gift of God is eternal life in Christ Jesus our Lord.” – Romans 6:23

Everyone sins, therefore we all are separated from God.  Christians view this as a spiritual “law” in the same way physicists view natural laws, like the First Law of Thermodynamics (which makes a scientific case for a creator, by the way).  Fortunately, God is loving and forgiving.  He doesn’t want anyone to perish but everyone to come to repentance (2 Peter 3:9).  That’s why Jesus came to live among people, to reveal God’s nature to us and take the punishment for our sins.  Once you have genuinely committed to follow Jesus, all your sins – past and future – are expunged (erased, gone).  You are completely and forever saved.

I rarely use the word “saved” when discussing my spiritual status.  I prefer to say that I am a Jesus Follower, because that’s what I’m trying to do – follow the example of Jesus.  Yes, I have been saved from the consequences of my sins.  I am a frog who realized the inevitable consequences of the frying pan.

“For God so loved the world, ithat he gave his only Son, that whoever believes in him should not perish but have eternal life. For God did not send his Son into the world to condemn the world, but in order that the world might be saved through him. Whoever believes in him is not condemned, but whoever does not believe is condemned already, because he has not believed in the name of the only Son of God.” – John 3:16-18 (ESV)